13 Arrested And 6 Injured After Protest In Portland 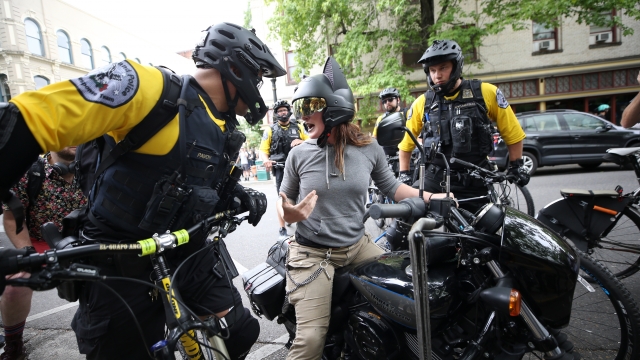 SMS
13 Arrested And 6 Injured After Protest In Portland
By Alec Larson
By Alec Larson
August 18, 2019
​The Portland Police Bureau estimates that around 1,200 demonstrators had gathered at the height of the demonstrations on Saturday.
SHOW TRANSCRIPT

Thirteen people were arrested in Portland on Saturday after a confrontation between far-right extremists and anti-fascist counter-protesters.

Multiple far-right groups converged in the city for a rally. They included the Proud Boys, which has been deemed a hate group by the Southern Poverty Law Center. They were met by counter-protesters from the anti-fascist group, Rose City Antifa, leading to altercations across downtown Portland.

Officers seized a variety of weapons — including bear spray, knives and poles — from demonstrators. Law enforcement declared a civil disturbance at one point. Six people sustained minor injuries over the course of the demonstrations, one of which required hospital attention.

President Donald Trump commented on the protest in a tweet early Saturday morning, saying there was "major consideration" to naming Antifa an "organization of terror" and that Portland was being "watched very closely."

This isn't the first time Portland has seen demonstrations between far-right and anti-fascist counter-protesters escalate into violence. The groups previously clashed in late June, resulting in multiple injuries.

The Portland Police Bureau estimates that around 1,200 demonstrators had gathered at the height of the demonstrations on Saturday, with over 700 officers enforcing security.